you haven't been introduced to the new poster yet now have you? you've probably spied it over to the right, but that doesn't excuse my tardiness. not one little bit. please accept my apologies. this is the july poster: 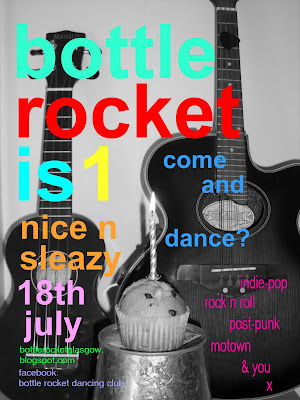 "see you on the 18th for my first birthday party?"

bottle rocket june round up

tis the morning after the done-ing and dusted-ing of bottle rocket's 12th (!) full club night! which makes next month an extra-special anniversary month, which we shall celebrate in the appropriate style: bottle rocket will forget until the last minute, causing a massive argument only rectified through lashings of make-up sex.

er, i mean we'll have a bacchanalian party the likes of which the world has never before witnessed! we'll great-gatsby glasgow to pieces!

well, we'll have a party at any rate.

but since this is all still 39, 495 minutes away (and that's a fact cos i mathed it), let's discuss last night's bottle rocket!

ta to all that popped along and danced with us. it was a learning experience. we learned that:

a) linday lohan is, in fact, a recording artist as well as an actress/party-girl, and her recordings are deemed requestable.

b) people really like the safety dance. apologies to mike for dissauding him from playing it so many times before...

d) we need to get a single-edit of common people. cos my legs aint feeling too good after six minutes of frenetic dancing/hopping around.

and e) attempts to put kenickie in a cd player will always result in punka being played, even if the user intended to play pvc. it's just too bloody tempting.

oh, and we completely forgot to take any snaps this month, so here's a dinosaur instead. 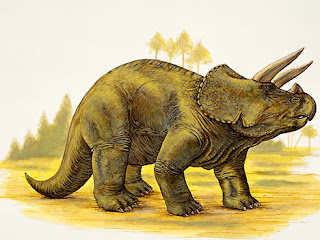 xxxxxxxx
Posted by chris at 13:03 No comments:

what you up to?

do you, like, wanna go out or something? maybe go and have a drink? 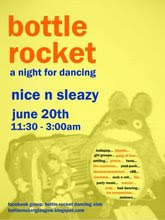 i mean, if you're busy that's totally fine, i just thought it might be fun, y'know? cos you said you like dancing, and i saw this club called bottle rocket and thought you might be into it. it's mostly just a bunch of dancing and stuff, but it's really good fun.

no pressure, obviously, but if you fancy checking it out then, y'know, get back to me or something. or i could totally just see you there. i'll be the one dancing badly to electric light orchestra and triple school. 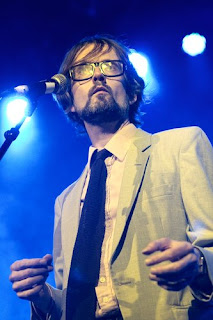 Jarvis (****) is in a generous mood this evening, gifting the crowd such tasty treats as a banana, jelly babies and red wine. But the most enthusiastically received gift is Jarvis himself, his comic cool ensuring that even extended jam intros (padding out a set drawn only from his two solo records) are welcomed as opportunities to enjoy his iconic, gangly vogue-ing. With his Britpop celebrity calcified into elder-statesman pop-oddity, he now works from a de-Pulped clean slate which gives him carte blanche to do, well, whatever the hell he wants. Angela’s grungy rock-riffs and Leftover’s wry crooning show off new album Further Complications to good effect, and while Jarvis himself mocks surprise at where these explorations have taken him (“I never thought I’d be sharing the stage with a saxophone” he rues), he continues to play to his strengths throughout: big choruses, witty repartee, and, of course, plenty of loose-limbed, arse-waggling dance moves.
Posted by chris at 17:59 No comments: 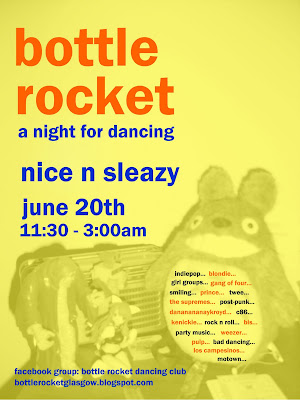 bottle rocket radio is dead, but let's not rule out a zombie-style resurrection in october. till then, i invite you to click here and listen to one of our 31 archived shows if you should ever have the urge to hear some crap banter, outdated gig info and lovely music. over the last nine months we played:

and a shitload of J-park.

xxxxxx
Posted by chris at 13:53 No comments: 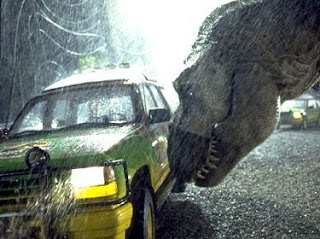 it's our last bottle rocket radio show of the academic year this afternoon. it is an EVENT. since it is an EVENT, i have decided it must be COMMEMORATED with a special newsfeed. its like twitter, cept not live and even more pointless. still, gives us something to do in the studio between songs...


14:10 mike is revising. he has an exam at three. but he is just so bloody dedicated to bottle rocket radio he's in the studio regardless. what a hero.

14:11 mike has noticed the newsfeed. he has stopped revising.

(Don’t come down from the stabbur)
(I was told by Laka, the singer)
(Don’t rattle with sandals)
(Don’t pretend to be a lady)

With my favorite trick
I spoof fauna and flora
that life wasn’t created in the sea
but out of love
love, love
Out of love

How many days we’ve ran over
lying down, eating bananas
so we fell onto lower branches
Without love
love, love
Without love

14:34 what a stupid idea this was. i suggest you scroll up and have another look at the picture of the dinosaur at the top. it's better than this drivel.

14:40 and now he says he has to bloomin go early. scratch what i said about his dedication, he's WELL FLAKEY

14:40 this is michael now. I HAVE A BLOODY EXAM CHRISTOPHER. GIVE IT A REST.


and if you can't follow all that gibberish, the songs were:

xxxxxx
Posted by chris at 14:06 No comments: 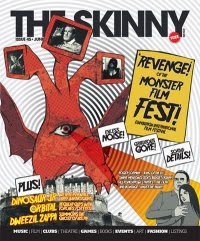 the june edition of the skinny is kicking about scotland as we speak so be sure to pick up a copy. i don't have many words in there this time round, just a review of the colourful band's debut ep and a review of the specials at 02 academy back in april.

my album reviews may not have made it into print, but they're dotted about the skinny website. there are appraisals of franz ferdinand's dub mix of the tonight album (***), james blackshaw's new one (**), laroca's 'valley of the bears' (***) and, er, the new paolo nutini record. which really wasn't my cup of tea (**).

bottle rocket radio fast approaches its final show of the academic year (but hopefully not calendar year - fingers crossed for a relaunch in october...)

it's your last chance to listen in (well, there'll be listen again options up for a while longer, but you know what i mean...)

and it'll be the last chance for some of our favourite bands to get an airing on the subcity digi-waves. it'll be an hour filled with some top bands who've somehow never cropped up on any of subcity's many splendid radio shows. we've a surprising amount to choose from, but since there's still 3 days before we say goodbye i don't wanna jump the gun by naming any - after all, i'd look like a right eejit if i say 'oh, we'll play superchunk probaby cos they're ace and no one else has' and then someone plays them tomorrow, thereby blowing a massive truth-hole in my unintentional lie. so i'll keep schtum, and you'll just have to listen in.

we probably will play superchunk though.

last saturday i DJed a hen-night at the Buff club (congratulations connie!). i played this bunch of stuff:

like it? then i do weddings, bar mitzvahs, birthdays and tuesdays. book me.
AND I'M NOT EVEN JOKING

xxxxxxx
Posted by chris at 00:06 No comments:

i wrote some words on patrick wolf's gig at the classic grand (29th may) which the skinny have just put online. here they are...


Cooler-than-cucumbers Yacht (**) might sound awesome at one a.m. in a sweaty Optimo, but as early-doors support they're exposed as no-substance nonsense. The duo gamely gurn and gyrate to their bass-y backing track, but often look lost in front of a largely disinterested crowd, who only really waken up to play with the liberally distributed balloons. 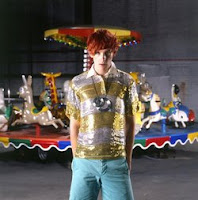 Patrick Wolf (***) has himself been accused of style over substance, but daubed in glitter and adorned with a head-set microphone for maximum posing opportunities, he wears his narcissism well. Of the new material, Battle is the crowd-pleaser, less for its repetitive war-cry chorus and more for Wolf's acrobatic forays into the crowd via railings and ledges, his proximity triggering ecstatic convulsions from at least one starry-eyed fan. Such devotion ensures that even appalling sound problems can't dampen spirits, but a niggling doubt remains. Beneath the cocksure looks and amiable banter, Wolf no longer seems as weighty a talent as was once promised, his showmanship not enough to distract from a dragging first half. But when The Magic Position's violin refrain kicks in at the close, the excellence of which he is capable reappears with conviction.
Posted by chris at 16:04 2 comments:

bottle rocket radio entered its final seven days today with our penultimate hour of net-broadcast. next week we're going to break from our 'format' (i use the term extremely loosely...) for an end-of-year special thingy. maybe we'll even manage to get through it without any technical hiccups (a preposterously far-fetched hope - don't go pinning your dreams on it...)

if you listened today you heard:

if you didn't listen but would like to, then there's this thing called 'listen again' you see. clicking it allows you to listen again. it's all rather splendid.

for some reason the show isn't available just yet, but check back here and it should appear sooner or later...
Posted by chris at 20:57 No comments:

penultimate radio (for real this time...)

our subcity-tenure is definately ending this time round (unless we're wrong again). just two shows to go, but they're sure to be doozys!

mike's found a andrew wk-curated mix tape which might get a (brief) airing - it's not very good you see - but we have plenty of other good stuff to offset it. stuff like alasdair roberts, vv brown and the whispertown 2000.

so that's tomorrow (thursday), 2-3pm at subcity.org. or listen again after that whenever you ruddy bloody well please!
Posted by chris at 11:14 No comments: